Road safety experts and police are urging motorists not to be distracted at the wheel of their cars as new legislation comes into force tomorrow (March 1, 2017) that will see people issued with six penalty points and £200 fines for using mobile phones whilst driving.

Road Safety GB North East revealed that drivers using a mobile phone whilst driving – either hand-held or hands-free – were four times more likely to be involved in a collision than other drivers. 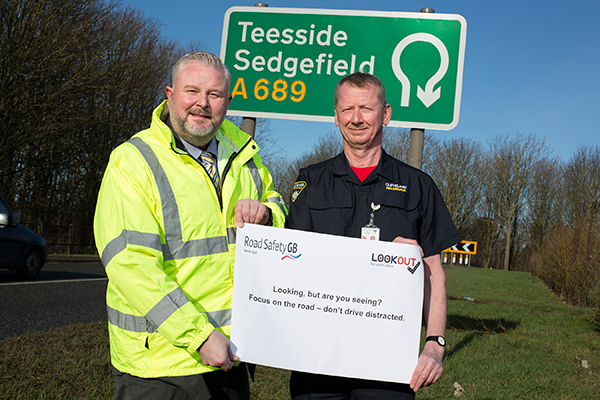 The group is launching its ‘Stay Focused on the Road’ campaign to coincide with the new Government rules designed to crackdown on mobile phone use at the wheel.

The tougher sanctions are being brought in amid mounting concern about the increase in the number of people using mobile phones at the wheel and the lack of prosecutions and convictions of offenders.

The Department for Transport is hoping that the new sanctions will act as a strong deterrent to drivers.

Not only will those caught get a £200 on-the-spot fine, but if they are caught twice and accrue 12 points they will automatically appear in court and face a fine of £1,000 and a driving ban of at least six months.

However, new drivers will be hardest hit – they face having their licences revoked after the first offence, and to regain their licence must reapply for a provisional licence and may only drive as a learner until they pass further theory and practical tests.

“While you’re driving the car is not the time to start multi-tasking. Switch off your phone, leave the radio alone, keep conversation to a minimum and just focus on the road around you,” said Paul.

“We see it all the time, people driving with one hand on the steering wheel and a phone in their other hand, without any regard for the law or the safety of other road-users.

“People simply do not appreciate the danger they are putting themselves and other people in when they are making calls or texting while driving. Just looking away for a split second is all it takes to hit a cyclist or pedestrian, or run into a stationary car. When you’re talking you’re not concentrating on the road.”

Paul said if a driver travelling at 30mph spent an average of two seconds looking at their phone, they will have travelled 27 metres while not looking at the road. This is more than twice the length of a double decker bus.

At 40mph, they would travel 36m – more than three times the length of a double decker bus – and at 70mph it would be 63m, which is almost the width of a football pitch.

Paul said these figures could be used to calculate the risk when the driver is distracted for any reason – not just by mobile phones.

During the past five years, there have been 1,415 road traffic casualties in the North East where a collision had occurred involving a distracted driver. That accounts for about 5% of total casualties in that period – between 2011 and 2015.

Of that number, four people were killed and 113 were injured because they, or someone else involved in the collision, was driving whilst distracted by a mobile phone.

However, while this number is a relatively small percentage of total injuries on the region’s roads, it is widely considered that the actual number of casualties resulting from the use of a mobile phone is much higher.

During the five-year period, 10,182 fixed penalty notices have been issued and 2,445 drivers in the region convicted in Magistrates Courts of the offence of using or causing others to use a mobile phone while driving.

However, eating and drinking at the wheel, adjusting the radio or CD player, talking to friends and relatives, or responding to children in the car, are all major distractions that cause collisions on the roads each year.

Road safety is a top priority for Northumbria Police and Motor Patrols Chief Inspector Dave Guthrie, of the Operations Department, said he hoped the change in legislation would act as a further deterrent to drivers.

He said: “This change underlines how seriously the authorities are taking driving while using your mobile phone and we are firmly supportive of the change.

“A motor vehicle in the wrong hands won’t just kill one person, it could kill half a dozen in a split second. That is why it is so important for people to heed our advice.

“Young drivers, in particular, think they can get away with playing on their phone but all it takes is for them to not concentrate for a split second. We have one simple message for motorists – don’t be that person who is responsible for claiming an innocent life for the sake of a text message.”

Severity of injuries resulting from collisions involving a distracted driver or rider in the North East, 2011 to 2015