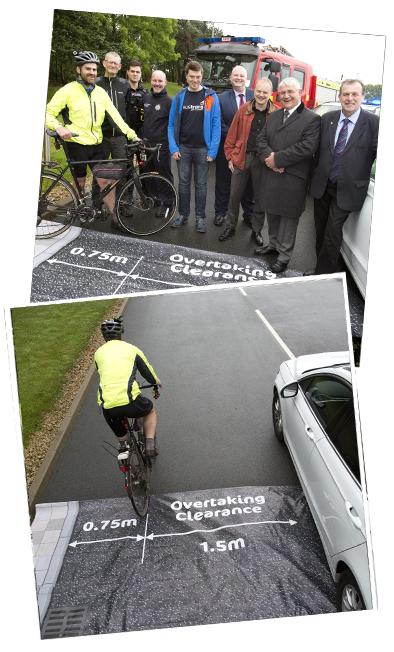 Motorists are being urged to give cyclists more room when overtaking with the launch of a new road safety campaign designed to eradicate ‘close pass’ drivers.

Road Safety GB North East (RSGB NE) is being joined by police, fire officers, and the Police and Crime Commissioners from both Cleveland and Durham, in the regional initiative to help safeguard cyclists and educate road-users about safer overtaking.

Road Safety GB North East is launching the campaign at a time when collisions and injuries involving cyclists typically increases.

Cyclist casualties in the region peak in July, August and September, with around a third of all collisions involving bikes happening over the summer months.

Paul Watson, Chairman of RSGB NE, said: “During the summer, we see cyclist casualties increase, but the majority of collisions are preventable.

“If everyone was a little more cautious and alert, slowed down and gave each other space, a lot of accidents could be avoided.

“I don’t believe drivers knowingly put cyclists at risk, but perhaps they’re not looking for them, or maybe they are unaware of the dangers of close pass overtaking.

“People overtaking too close to cyclists is a cause of a number of collisions, however, there may be numerous near misses that we know nothing about. We are asking all road-users to look out for each other and to help safeguard cyclists.”

Cleveland and Durham Road Policing Unit have received a Close Pass safety mat from national cycling group Cycling UK, which they will use to demonstrate to drivers the minimum space they should allow when overtaking bikes.

Motorists should leave at least 1.5m of space between their vehicle and the cyclist when overtaking at speeds less than 30mph, and this should be greater in poor weather conditions or when the car is travelling at speed.

In the coming weeks, officers will take the mat to events across the North East to demonstrate safe passing distance in the hope that ‘close pass’ incidents decrease.

Failing to look properly, by either the driver or the cyclist, is the most common cause of cycle-related collisions – accounting for three quarters – and men aged between 35 and 44 are the most at-risk group.

Ron Hogg, Durham Police and Crime Commissioner, said: “I am very supportive of this important campaign. There are too many accidents on our roads involving cyclists. The advice being offered to drivers and cyclists can really help to reduce casualties.”

Barry Coppinger, Cleveland Police and Crime Commissioner, said: “As a keen cyclist, I’m delighted to see the Close Pass scheme rolled out across the North East.

“We have had cyclists sadly die on Cleveland’s roads and several serious collisions, which is why it’s so important we educate drivers and cyclists to be more aware of each other. I encourage people to attend the events where the mats will be displayed to learn more about how to stay safe on our region’s roads.”

West Midlands Police launched the first Close Pass campaign last year to target drivers who overtook cyclists too closely. As a result, they saw a 50% drop in close pass offences in the first three months after the campaign.

The initiative was supported by Cycling UK, prompting them to launch their £12,000 ‘Too Close for Comfort’ fundraising campaign to enable specially-designed Close Pass mats to be distributed to every Police Force in the UK, which demonstrate a safe passing distance and can be used to educate drivers.

So far, 34 police forces out of 45 are rolling Close Pass campaigns.

Duncan Dollimore, from Cycling UK, is supporting the RSGB NE campaign, which launched at North Durham Academy, in Stanley, today, also attended by members of the DBUG cycling group from Durham University, and representatives of Sustrans charity, which promotes walking and cycling.

He said: “Close passes are unfortunately a regular occurrence for most cyclists, and can be especially off-putting for new and less confident cyclists. Such dangerous manoeuvres are rarely done from a position of malice by the driver, but rather ignorance. That’s why Cycling UK is so supportive of initiatives like this run by Road Safety GB North East, which places education first.”