Pedestrians most likely to be involved in road collisions during autumn

Pedestrians are mostly likely to be involved in a road collision in the weeks leading up to Christmas – with children accounting for a third of casualties every year. 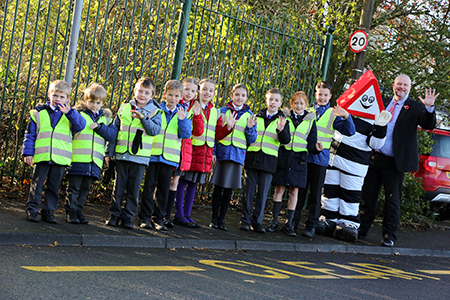 As the nights get darker earlier, Road Safety GB North East (RSGB NE) is appealing for all road-users to slow down and to look out for each other during the coming weeks.

Drivers are urged to cut their speed around schools, playgrounds, shopping centres and pubs, and people on foot are being reminded to use pedestrian crossings wherever possible, not to take chances, and to wear bright clothes in order to be seen.

The North East’s 12 local authority road safety officers work with the region’s schools throughout the year to advise children how to stay safe on the roads.

Their advice is never more relevant than now, with November and December typically seeing the greatest number of pedestrian casualties.

Almost a third of pedestrian accidents happen between October and December, with 7am to 9am and 3pm to 6pm the most prevalent times of day.

Children account for a high percentage of the casualties, with boys aged between 11 and 12 the most likely age group to be injured. However, almost a quarter of adult pedestrian casualties are found to have been impaired by alcohol – with this figure rising sharply in collisions that occur between 10pm and 6am.

Chairman of RSGB NE Paul Watson said: “Now is the time when we see a spike in pedestrian casualties on our roads, so we want everyone to slow down and to take a few extra seconds to look out for each other.

“In the five years between 2011 and 2015, 88 pedestrians were killed on the region’s roads, and more than a thousand were left seriously injured. We know casualty figures for pedestrians are steadily coming down, but we would like to see them reduce even further.”

He said failure to look properly, by either the pedestrian or driver, was the main cause of collisions involving people on foot, and where children are run over, 77% of accidents were down to the child simply not looking.

Most pedestrian casualties (86%) happened on 30mph urban roads and almost half of those were on unclassified or estate roads.

Between 2011 and 2015, the highest number of pedestrian casualties were seen in County Durham and Newcastle.

“It may not be your fault, but you could be involved in a collision due to somebody else’s mistake,” added Paul.

“Some children simply run out into the road without looking. Adults may be too embroiled in their phones to look up when crossing the road, or impaired by alcohol. We are asking everyone to slow down whether they are driving or walking, and make sure they look about them.

“When it comes to pedestrian casualties, they tend to suffer greater injuries than anybody else, therefore it’s paramount that people drive within the speed limit. It could save a life.”

Deputy Headteacher Sarah Brady, from St Bernadette’s School in Middlesbrough, has invited RSGB NE into school to give a presentation to pupils on road safety.

She said: “Road safety is always something we talk to pupils about, however, as the nights get progressively darker with winter approaching, and the children are getting excited about Christmas, the risk of them running out into the road is greater and the likelihood of them being seen is less.