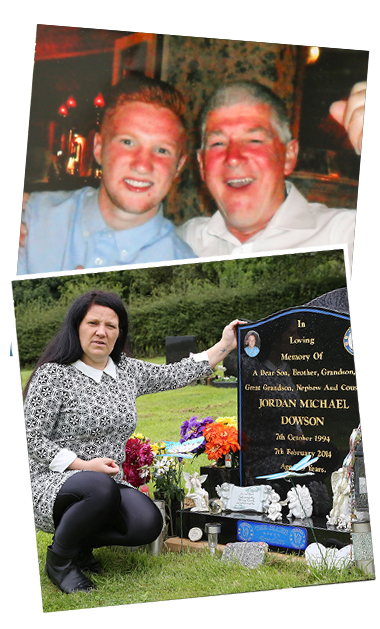 The distraught family of a teenager killed in a car accident have backed a campaign to safeguard young drivers on north east roads.

The family of talented footballer Jordan Dowson said they will never recover from his death and are supporting Road Safety GB North East (RSGB NE) in its Young Driver campaign.

The latest statistics show that young people are four times more likely to be involved in a crash than other drivers, with the risk increasing when they have a car full of friends.

Whilst young drivers are not at fault for all collisions they are involved in, when they are responsible the main causes are failing to look properly, risk-taking, distraction, speeding, inexperience and driving while impaired by drink or drugs.

Between 2011 and 2015, almost a third (29%) of road accident injuries in the region related to collisions involving young drivers aged between 17 and 24. This is despite young people accounting for only 7% of driving licence-holders.

Sadly, Jordan, 19, from Guisborough, was one of those casualties. He died in February 2014 while travelling as a backseat passenger in his friend Josh Butters’ car on the A174 Brotton by-pass in east Cleveland. He had been wearing a seatbelt and no one was alleged to have been speeding.

However, the courts heard how Butters had veered into the oncoming lane and collided with two cars – killing his friend Jordan at the scene and injuring his own girlfriend Ashley East. Their car came to rest on its roof.

The prosecution claimed Butters had possibly been trying to perform a dangerous overtaking manoeuvre, but he denied it and said the steering wheel had locked and the brakes had failed as the road naturally bent to the left.

However, tests proved the car had been in perfect working order. Why Butters drove his car into the wrong lane, therefore, may never be known.

He received a three-and-a-half-year prison sentence for causing the death of Jordan by dangerous driving – while still refusing to accept responsibility for killing his friend. He had passed his driving test just nine weeks prior, and had only taken ownership of his car a few days before.

Jordan’s mum, Tanya Lofthouse, said: “Every day is still very painful for us because Jordan should not have died that day. He was such a fun, happy character – he had his whole life ahead of him.

“We will never really know what happened. All we do know is there was no fault with the car and for some reason Josh was in the wrong lane, which caused the collision that ended Jordan’s life and changed ours for ever.

“The pain never goes away, but we must learn to live with it. Talking about it is difficult but we hope that by supporting the campaign we can show young people how road accidents can ruin and take lives. If it helps save one life, it will have been worth it.”

Every day Tanya now visits Jordan’s grave at Guisborough Cemetery and is still reliant on the medication she began taking after his death.

Jordan’s nine brothers and sisters are also struggling to come to terms with his loss, as are his grandparents, who he stayed with and was very close to.

“Christmas Day for us was always a huge family party, with Jordan at the centre of it all,” said Tanya.

“Now every Christmas Day, we take a walk to the cemetery to visit Jordan.”

Whilst there has been a decrease in young driver accidents in recent years, nationally, after suicide, road traffic accidents are the main cause of death of young people.

In the past five years, 38 young drivers have been killed on the region’s roads, 440 were seriously injured and almost 4,000 slightly injured. However, a total of 64 young people have died in that time, including passengers and pedestrians – of which Jordan was one.

The more rural counties of County Durham and Northumberland have the highest young driver casualties.

Paul Watson, Chairman of Road Safety GB North East, said: “People should not under-estimate the impact a serious accident can have on themselves, friends and their families. They can kill and maim, and they can also lead to prison sentences, fines, poor job prospects and limitations on travelling abroad.

“We know a lot of young drivers are good drivers, however, figures show that those aged 17-24 are four times more likely to be involved in a crash than other people. This may be due to their own actions, or simply inexperience at avoiding the dangerous actions of other drivers.

“We urge young people to be sensible and to take responsibility for each other. If the driver is acting irresponsibly, tell them to stop. If a passenger is distracting the driver, do something about it. Good mates do what’s right and look out for each other.”

He added: “Young drivers may not always be concerned about their own welfare, but could they live with the guilt if their behaviour led to the death of a friend? That’s the reality.”

PC Neil Foster, of Cleveland Road Policing Unit, was the lead investigator in the crash that killed Jordan.

He said: “This is a tragic case that has taken a life and changed the lives of countless others, and has created so much heartache. We urge young drivers not to be distracted, to be sensible, to stay focused on the road, and to keep within the speed limit and maintain the high standards they applied when they passed their test.

“We all only get one life, so we need to do everything we can to safeguard it.”