Football clubs across the region have backed a campaign by Road Safety GB North East to give drink driving the red card during Euro 2016.

The road safety group is being joined by Newcastle, Middlesbrough, Sunderland and Hartlepool football clubs as it aims to raise awareness about the dangers of drink driving and ultimately reduce accident and casualty figures during the football tournament. 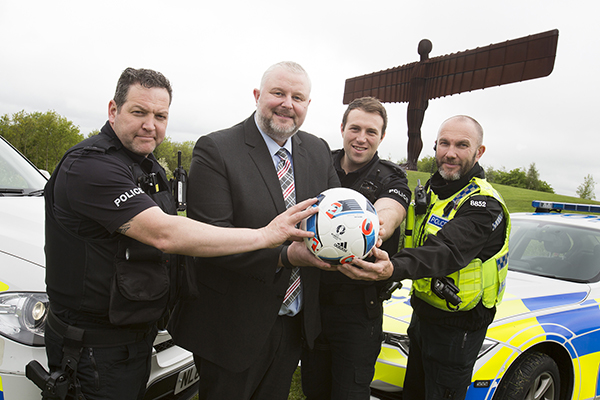 Each of the clubs has given its voice to the campaign to persuade people to leave their cars at home when they enjoy a few drinks while watching the games, which start on June 10 – and to make sure they are not over the limit the following morning.

As part of the drink drive message, Road Safety GB North East has produced a range of materials for use during the tournament, including a Euro 2016 game planner, sweepstake and score predictor.

County Durham has the worst record for drink driving accidents in the region, followed by Northumberland, Sunderland, Newcastle, Gateshead and North Tyneside.

Road Safety GB North East, which is made up of road safety officers from across the region, said the campaign was being launched to coincide with the tournament because alcohol consumption was expected to rise sharply.

Chairman Paul Watson said: “We don’t want to put a dampener on the party spirit – we know everyone is going to be getting behind England and getting together with friends and family to watch the games during the coming weeks.

“We simply want people to plan beforehand and arrange a taxi or lift home. Don’t take the car. And just as important is the morning after. You could still be well over the limit for your drive to work. Remember, you don’t have to be drunk to be a dangerous drink driver.”

Sam Allardyce, Manager of Sunderland Association Football Club, said: “We’re all really looking forward to Euro 2016, and hoping we will have something to celebrate if England does well.

“However, it’s not a good idea to mix alcohol and driving. If people are having a few drinks while watching the games, they should leave the car at home, and think about whether they are still over the limit the following day. Let’s enjoy the tournament and be safe.”

A Newcastle United spokesman said: “Road safety is of the utmost importance in the North East and we would urge people not to drink and drive, especially with Euro 2016 soon to be upon us.

“Any campaign that educates drivers about safe road-use, which in turn lowers the numbers of casualties and fatalities across the region, is one we’re right behind. It’s reckless, dangerous and against the law – leave your car at home, and that includes the morning after as well.”

Middlesbrough FC captain Grant Leadbitter said: “We all hope England have something to celebrate in the European Championships, but if you have a drink please don’t get behind the wheel of a car.

“Alcohol and driving just don’t mix. And don’t forget that you may still be over the limit the next morning if alcohol is in your system. Let’s keep our roads safe in the North-East this summer.”

Craig Hignett, Manager of Hartlepool United Football Club, said: “Everyone wants a good night out and to enjoy the football during the tournament, but please be sensible. Go and have a good time with your friends, but take a taxi home. Don’t ruin your life or possibly someone else’s by making a stupid mistake.”

And Curtis Fleming, Hartlepool’s first team coach, added: “Sometimes taking the car is just the easy option. A two-minute drive is a five-minute walk. If you get into the driving seat of a car after drinking, you are getting into a machine that could kill someone. It’s not worth it.”

The campaign is being launched as new figures show that June is one of the worst months of the year for recording serious and fatal drink drive accidents, and that almost half of accidents involving alcohol occur on Saturdays and Sundays.

Men are also much more likely to be at risk than women, with 83% of drivers who were suspected of drink driving, or failed or refused a breathalyser test, being male, while 69% of people injured were men.

Meanwhile, young people are also the most at risk, with 17 to 34-year-olds accounting for 64% of suspected drink drivers and 59% of casualties.

Paul added: “The majority of people make sure that they don’t drive on a night out, and that’s great, but equally, a lot of people don’t think about the morning after.

“It takes an average of one hour for a unit of alcohol to pass through your body, so a pint of beer will take almost two-and-half hours to wear off, as will a large glass of wine. Remember, the majority of drinks amount to more than one unit.

“If you are drinking for a prolonged period until the early hours, chances are you won’t be legally fit to drive the next morning. Be responsible and let’s remember the tournament for all the right reasons.”

Total drink driving injuries and fatalities by local authority, from 2011 to end of 2015