Young mum Faye Keeler is facing parenthood alone after her “perfect” partner Chris Earl was killed in a motorbike accident near their home.

The grieving 25-year-old has backed a campaign by Road Safety GB North East, which aims to raise awareness of bike safety and reduce the number of motorcycle casualties across the North East.

Her partner of ten years, Chris, died instantly less than a mile from their home in Liverton Mines, east Cleveland, after his bike hit an oncoming truck on a warm summer’s day last July.

Filled with a mix of anger and emptiness, Faye said she will never get over the death of her 28-year-old boyfriend, who left their home to return his bike to a lock-up garage and never came home.

The couple, who had lived together for three years and had a toddler son, Harley, had so many plans, but now Faye is facing a very different life without him.

“Chris was perfect. He was our whole life and in an instant he was gone,” said Faye.

“I don’t really see a future for myself now –  I just focus on Harley. Without him I wouldn’t have been able to carry on.”

“Chris loved riding and his bike was his pride and joy, so I would never tell people that they shouldn’t ride bikes, but they should take it easy and ride safely.”

Road Safety GB North East has launched the bike safety campaign after last year seeing a 13% rise in serious bike accidents in the region, with 15 bikers killed in the North East during 2015 alone – with Chris, a taxi driver, among them. 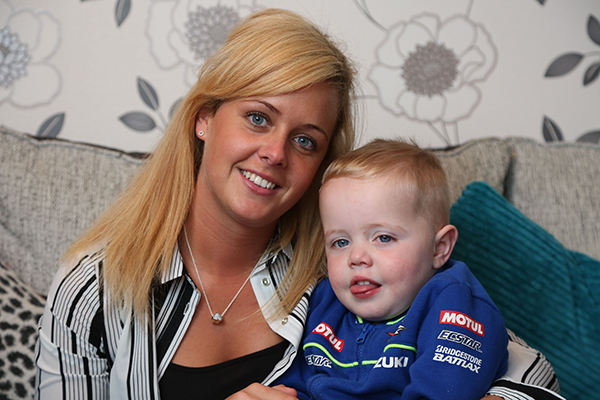 On the day of the crash, he had spent hours at home cleaning and maintaining his bike in preparation for his first ever biking weekend away with his dad and friends, while Faye and Harley played beside him on the drive.

Just before 6pm, he left to take his bike to the lock up on the nearby industrial estate, but, for whatever reason, decided instead to carry on up Liverton Road. A couple of seconds later he was dead. He had been speeding and was on the wrong side of the road when he hit an oncoming truck. Chris suffered massive injuries and died instantly.

Still playing outside, Faye and Harley watched as the air ambulance landed just outside the village – totally unaware that it had been called for Chris. However, it wasn’t long before word spread through the close-knit community and Faye’s life began to unravel.

“Chris was a brilliant dad and partner – he worked hard and had so many friends – and he had so much to live for,” she added.

“I sometimes do feel angry because it didn’t need to happen – I also feel numb. Chris and I had been together since I was 15. He was all I knew and now I have no idea who I am anymore.

“All he ever wanted was a family, but his time as a dad was so short-lived.

“Most nights I cry myself to sleep – all of his things are as they were in the house. Sometimes I just imagine him walking through the door. There is an emptiness in the house and I don’t know if that will ever go away.”

She added: “Chris did like to ride fast and I know on this occasion he didn’t manage to get back into his own lane in time. Sometimes, however, accidents happen purely because drivers don’t see bikes.

“Drivers, as well as bikers, need to watch out and be more aware of the terrible consequences of bike accidents.”

He said failure to look properly, by both drivers and bikers, was a major factor, along with motorcyclists simply losing control of their vehicles.

As we approach the Bank Holiday weekend, he appealed to all road-users to slow down and drive according to the conditions.

He said: “The death of Chris Earl is incredibly sad because he had so much to live for, and the impact on Faye and Harley will last a lifetime.

“We appreciate that riding for some people is a way of life and a much-loved pastime, so we are not here to tell people not to ride. However, we do want people to take it easy and to make sure they have the skills and experience required for riding the larger bikes.

“Drivers of cars and heavy goods vehicles also need to take a second longer to look for bikes at junctions and before they overtake on major roads because they are easier to miss.

“I don’t think anyone wants to go through what Faye is experiencing, or be the cause of it, so we urge everyone to look out for each other.”

Chief Inspector Mark Pitt, from the Cleveland and Durham Specialist Operations Unit, said: “We work all year round, alongside partner agencies such as Road Safety GB North East, to prevent incidents like this one.

“The loss of Chris’ life was tragic and could have been prevented. None of us as traffic officers wants to have to tell someone that they will have to spend the rest of their life without a loved one. Simply abiding by the laws that have been put in place for the safety of all road users gives us hope that the number of devastating incidents like this are kept to a minimum and we will continue to work hard to keep our roads as safe as we possibly can.”

Phil Lancaster, Director of Community Protection at Cleveland Fire Brigade, said: “This incident is a tragic but timely reminder as many motorcyclists are coming back onto the roads as the weather improves. One fatality is one too many and as an organisation we are committed to improving safety on our roads through education programmes, such as Learn and Live. Our message to all road-users is stay safe and look out for each other.”

County Durham had the highest number of serious accidents and fatalities during the past five years, followed by Northumberland, Sunderland, Newcastle, Gateshead and North Tyneside. However, given the size of County Durham and Northumberland and the nature of the roads, these figures are to be expected.

However, while Redcar and Cleveland recorded 103 biker accidents in total, which was relatively low in comparison to other areas, four of them proved fatal, and similarly, in South Tyneside three people were killed in a total of 120 road smashes involving motorbikes.