Football clubs across the region are backing a campaign by Road Safety GB North East and the emergency services to give drink and drug driving the boot during this summer’s World Cup.

The road safety group is being joined by Middlesbrough, Hartlepool and Newcastle football clubs as it aims to raise awareness about the dangers of driving under the influence, and ultimately reduce accident and casualty figures during Russia 2018, which kicks off next week. 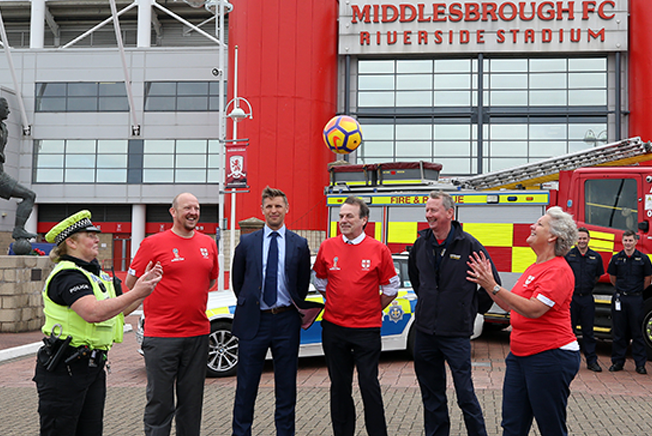 Each of the clubs is urging people to stay safe during the month-long competition by planning ahead and ensuring they leave their car keys at home if they are planning to drink while watching the games.

During the five years between 2013 and 2017, 40 people were killed in the North East due to a drink/drug driver, 320 people seriously injured and a further 1,544 slightly injured.

And the incidents of driving under the influence are expected to rise during the next few weeks as people take to pubs, parties and BBQs to watch the games.

Figures show that during the Euro 2016 football competition, there was an increase in drink and drug driving injuries, both on the day of, and the day after England’s matches. On these days, drink/drug drive injuries increased from 6% to 8% of all injuries, and those resulting in death or serious injury rose from 8% to 19%.

Overall, drink and drug drive casualties have fallen by 7% over the past five years, however, the number of people killed or seriously injured has increased by 40%, from 58 in 2013 to 81 in 2017.

Middlesbrough FC defender George Friend said: “We’re all looking forward to the World Cup, but if you have a drink please do not drive.

“Alcohol and driving don’t mix. That also goes for the morning after – you may still be over the limit from the night before with alcohol in your system. Let’s enjoy the World Cup and make sure we keep our roads safe in the North-East this summer.”

Carl Magnay, Club Captain of Hartlepool United Football Club, said: “It’s brilliant to get together with friends and watch England in the World Cup, but we all have to make sensible decisions.

“Driving under the influence of alcohol endangers you and those around you, so don’t ruin your life or somebody else’s through a stupid mistake. If a five-minute walk is the choice between life and death, then it really isn’t worth it. Leave the car keys at home.”

As part of the drink drive message, Road Safety GB North East has produced a range of materials for use during the tournament, including a World Cup game planner, sweepstake and score predictor,which can be downloaded here.

RSGB NE Chairman Paul Watson said: “The decision to drive when you’re over the limit takes just a split second, but the consequences could last a lifetime.

“We are not trying to dampen the fun and spirits of the World Cup; far from it. We want people to go out and have a great time, and hopefully England will do us proud. However, we do want people to plan ahead. Either be the designated driver and stay on soft drinks or arrange a lift from a friend, book a taxi or use public transport.”

A Newcastle United spokesperson said: “Road safety is hugely important throughout the country. Here in the North East we would urge people to ensure they do not drink and drive over the limit under any circumstances, especially during the World Cup this summer.

“If you’re planning on going out to watch the games and having a drink, make sure you leave your car at home and do not take any risks – drink-driving is reckless, dangerous and against the law.”

Young people are most at risk of being involved in drink/drug driving collisions, with 17 to 34-year-olds accounting for 62% of suspected drink drivers and 55% of casualties.

Chief Inspector Graham Milne, from the Cleveland and Durham Specialist Operations Unit, said: “We hope that it will be a successful and enjoyable tournament for fans, with fun at the top of their agenda. Our message here is clear and simple – drive sober. The worst part of our job is knocking on somebody’s door to tell them that a loved one has been involved in an accident and has sadly passed away. We want to avoid that at all costs.”

Cleveland Police and Crime Commissioner Barry Coppinger said: “It’s important to remind people that while the World Cup offers the opportunity to have fun with friends and family, you shouldn’t let the festivities cloud your ability to make the right decision.

“Making the choice to get behind the wheel while under the influence of drink is not only risking your own life, but the lives of innocent road-users and pedestrians. Do not take the risk – either have a drink-free day or find an alternative way to get around.”

Durham Police, Crime and Victims’ Commissioner Ron Hogg, said: “I really hope people enjoy the World Cup, however, I want people to do it sensibly and safely.  The decision to get behind the wheel whilst under the influence of alcohol or drugs can have a devastating effect on people’s lives.”