The heartbroken loved ones of a man who was killed by a drink/drug driver are urging people to avoid driving under the influence as World Cup fever begins to grip the North East.

Devastated Michelle Norton lost her only child, Lewis Knapp, last year after he was run over by a drink and drug driver during a night out in South Shields. 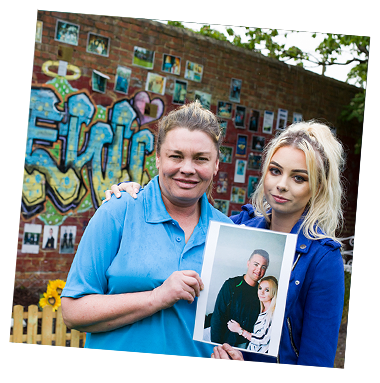 In the hope of preventing another family going through the same pain, she is backing Road Safety GB North East (RSGB NE) in urging people to leave their car keys at home before going out drinking during this summer’s World Cup, which kicks off in Russia next week.

RSGB NE is being joined by police and fire crews from across the region, as well as Newcastle, Middlesbrough and Hartlepool football clubs, as it aims to reduce alcohol and drug-related road casualty figures during the World Cup, when alcohol consumption is expected to sharply rise.

It is kicking off the campaign at South Tyneside College in South Shields today (June 6), supported by Lewis’ girlfriend, Caitlyn Hardy, who will be talking to students about the dangers of drink/drug driving.

“We know more people will be drinking and going out having a good time during the football, but they must think about the consequences of driving under the influence.

“People should avoid having even one drink. They may feel OK, but they are not. It’s easy to think you will just have one drink, but then before you know it, it has become two or three. Don’t drink at all if you’re driving.”

Lewis, 20, who was known as Lewi to his friends and girlfriend, died on Good Friday of last year after being run over by Connor Emms, who had been drinking and taking cocaine.

Emms, 21, of Sycamore Avenue, South Shields, did not have a driving licence and was driving at more than twice the 30mph speed limit when he hit Lewis, catapulting him over the car. Emms did not stop and Lewis died at the scene from multiple injuries.

He later handed himself into police when the alcohol had been eliminated, but the cocaine remained. He pleaded guilty to causing death by dangerous driving, drug driving, failing to stop after an accident, having no insurance and driving otherwise in accordance with a licence. He was jailed for four-and-a-half years and disqualified from driving for three years, with an extended period of two years and three months.

Michelle said her sheet metal worker son, who worked at Washington Metal Works, was her life. They were exceptionally close and now her only mechanism for coping with his loss is to stay exceptionally busy.

“From the moment I was told that Lewis had died, I felt like I was living in a bubble, and I’m still in that bubble today,” added Michelle.

“The pain doesn’t get any less, but I have learned to take one day at a time. I get a lot of comfort from going to the memorial garden that his friends have set up for Lewis, and we talk about him all the time, which helps. There is a huge hole in my life that will never be filled, and that is what people should think about before they decide to drink and drive.

“They may not harm themselves, but they could take the life of someone else, and countless people will be affected, including their own family. Nobody wants that on their conscience for ever.”

Lewis’ girlfriend, Caitlyn, who was with Lewis at the time he died, is planning to go on holiday to Disney World Florida with Michelle later this year. It is a holiday they were all planning to take together before he died.

“We are supporting this campaign because we want people to think about what they are doing and the impact they could have on so many people,” said Caitlyn, 20, from South Shields.

“On that night, Connor Emms did not go out with the intention of killing someone, but because he decided to drive when he shouldn’t have, he took Lewis’ life and ruined so many others. There is no moving on from this for any of us. People should think twice before they get behind the wheel.”

As part of the drink drive message, the road safety group has produced a range of World Cup materials for use during the football tournament, including a Russia 2018 wall chart, sweepstake, and score predictor, which can be downloaded here.

Between 2013 and 2017, 40 people were killed on the region’s roads due to a suspected drink/drug driver, 320 were seriously injured, and a further 1,544 were slightly injured.

RSGB NE Chairman Paul Watson said: “What happened to Lewis is heartbreaking and I know both Michelle and Caitlyn are still struggling to come to terms with his death.

“The decision by Emms that night to drive took just a split second, yet the consequences of it will go on for a lifetime. We thank them for helping us raise awareness.

“We are not trying to dampen the fun and spirits of the World Cup; far from it. We want people to go out and have a great time, and hopefully England will do us proud, too. However, we do want people to plan ahead. Either be the designated driver and stay on soft drinks or arrange a lift from a friend, book a taxi or use public transport. Do not drive under the influence; the impact can be devastating.”

Chief Inspector Dave Guthrie, of Northumbria Police’s Motor Patrols Department, said: “We don’t want to stop people enjoying their summer, or to stop meeting up with friends to watch the football, but the message of this campaign is very clear – if you are having a drink then don’t drive.

“Alcohol impairs your ability to drive and if you get behind the wheel of a car when you are drunk then it could lead to a serious collision. This kind of incident can tear families apart and people need to be aware of the potential consequences of driving over the limit.

“If you are going out to watch the football and are going to have a drink then you need to make sure you plan your journey. If you know you’re going to be over the limit, then you should make arrangements to get home in advance.

“We will be out in force across the region and if you decide to ignore our advice and get behind the wheel while under the influence then you will be arrested.”

Total drink/drug driving injuries and fatalities by local authority, from 2013 to end of 2017