Pedestrians are most likely to be involved in a road collision after dark, making the autumn and winter months particularly hazardous for those people getting about on foot.

It’s important that all road-users, including pedestrians, look out for each other and slow down, especially when driving around built up areas.

Drivers are urged to cut their speed around schools, playgrounds, shopping centres and pubs, and walkers are reminded to use pedestrian crossings wherever possible, not to take chances, to take a second longer to check before stepping out, and to wear bright clothing.

Be seen, and slow down!

Peter and Allison Fennon, from Redcar, know only too well the devastation and finality road accidents can bring.

Their only child Kirsty died at the age of 18 after being hit by a taxi after a night out in the town.

Instead of looking forward to the day Kirsty would get married and have children, now her parents are struggling to cope without her.

Allison said: “Kirsty had everything to live for, but she was gone in an instant and our lives will never be the same again.

“She wasn’t just a daughter – she was my best friend – and I only wish I could make things different. I keep asking ‘why did this happen, why was she there, why was the driver speeding?’, but it’s too late for questions.

“We want to urge young people to stay with their friends after a night out and to always get a taxi home. We know people drink, but it’s important that they keep their wits about them and that they look out for each other.

“However, drivers also need to be responsible and must watch their speed, particularly after dark and close to pubs and clubs. If the taxi driver had been going slower in our case, maybe Kirsty would have lived.” 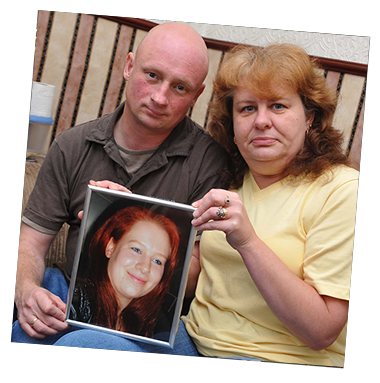 “We know people drink, but it’s important that they keep their wits about them and that they look out for each other.”

Almost a third of pedestrian accidents happen between October and December, when the clocks go back and the nights draw in, with 7am to 9am and 3pm to 6pm the most prevalent times of day.

Children account for a high percentage of casualties, with boys aged between 11 and 12 the most likely age group to be injured.

However, almost a quarter of adult pedestrian casualties are found to have been impaired by alcohol, with this figure rising sharply in collisions that occur between 10pm and 6am.

Most pedestrian casualties happen on 30mph urban roads and almost half are on unclassified or estate roads.