Motorcyclists account for less than 1% of total miles travelled on North East roads, yet they account for 19% of those people who are killed or seriously injured each year.

Most biker injuries occur on urban roads, and the majority of serious injuries and fatalities involve the larger bikes – those over 500cc.

While there are many reasons behind collisions, bikers losing control of their machines is a common factor in the most serious crashes recorded.

However, even more common is simply the failure to look properly – by either the biker themselves or other road-users.

We urge all road-users to look out for each other and this is particularly relevant when referring to bikes, as they are easy to miss.

We urge drivers to take a second longer at junctions to look for bikes, and to look over their shoulder to check their blind spot before pulling out to overtake.

Paul Grieves had only been married for a year when he was knocked off his motorbike by a car, causing enormous brain and internal injuries.

He spent five weeks in a coma and almost five months in hospital, with his wife Kathleen unsure for a time whether her husband would live to tell the tale.

After several attempts to return to work, he had to accept that his brain injuries had resulted in dire lasting effects and he was retired on medical grounds from his job as a CCTV surveillance operator.

Paul had to re-learn everything. His short-term memory was irrevocably damaged and he had no memory of the crash or anything during the two years before it. Devastatingly, he has never been able to recall memories of his wedding day.

Paul, from Gateshead, said: “I was an experienced, advanced rider and was sensible. I was only riding home from work, which was something I did all the time. But, in a split second, our lives were changed forever.”

“I firmly believe that my bike helmet saved my life,” added Paul.

“I always bought the best helmet and equipment that I could afford, and I think without it, I would have died that day.

“I want people to learn from what happened to me. You need to ride according to the road and the weather and, importantly, you should always try to anticipate other road-users’ mistakes. Look ahead and be prepared for people pulling into your path.

“And drivers out there need to take a second longer to look for bikes. If you hit a biker, the consequences can be horrific. I don’t think anyone wants to live with that.” 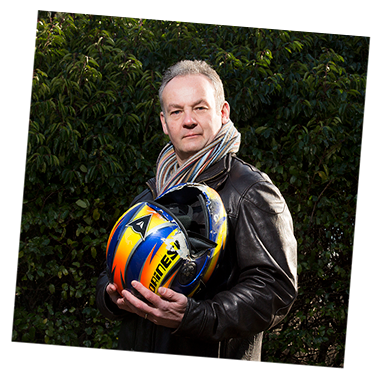 “I firmly believe that my bike helmet saved my life”

Improve your safety on a motorcycle

Shiny side up: For some great advice on how you can be a top motorcyclist and stay safe on the roads whilst on your bike

Do you know the law when it comes to your bike helmet? Check out these Government guidelines