Accident and emergency doctors at a North East Hospital are urging all pedal cyclists to wear good quality helmets after witnessing first hand the head and face injuries that can occur in bike collisions.

The team of consultants at University Hospital of North Tees in Stockton are backing Road Safety GB North East’s cycling safety campaign in the hope of raising awareness about the importance of protective head gear. 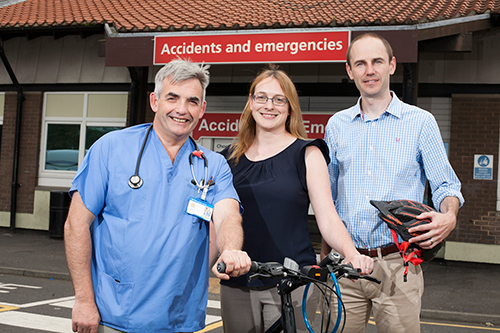 Consultants Andy Simpson, Kate Williamson and Kevin Moore are all keen cyclists, so appreciate people’s enthusiasm for getting out on their bikes.

However, they said with more and more people taking up the pastime, they are seeing an increased number of injured cyclists coming into A&E, highlighting the need for everyone, including children, to wear helmets and protective gear.

Andy, who has been a doctor for 29 years, is also speaking from experience. He came off his bike a few years ago, landing face down, suffering concussion and facial injuries, causing him to lose four front teeth.

“I’m certain that my helmet saved my life or prevented me from suffering a brain injury,” said the consultant.

“A quarter of my helmet was broken off inside, so if I hadn’t been wearing it, my head would have taken that force.

“I can’t see any good reason why a cyclist wouldn’t wear a helmet. It doesn’t take much to come off your bike and suffer a serious brain injury, but it does takes a long time to recover from a brain injury, if people ever do recover 100 per cent.

“If we can reduce the likelihood of head injuries happening through raising awareness, it will be worth it.”

Road Safety GB North East (RSGB NE) has joined forces with police, fire officers, and the Police and Crime Commissioners from both Cleveland and Durham, to promote cycling safety this summer.

Cyclist casualties typically peak in July, August and September, with around a third of all collisions involving bikes happening over the summer months – when more people take to the roads on their bikes.

Consultant Kevin Moore said: “There seems to be more people than ever cycling now, and in the last couple of years I would definitely say we have seen an increase in cycling-related injuries. I like to cycle myself, so am not being a kill joy, but I have seen too many significant head injuries to know that whenever I go out on my bike, or my son pedals his bike, we both wear helmets.”

And his colleague, consultant Kate Williamson, a keen mountain biker, said she personally experienced how serious cycling accidents could be when her husband came off his bike in Hamsterly Forest last year. He suffered facial injuries, concussion and short term memory loss and was still receiving hospital treatment three months after the accident.

She said: “My husband has physically recovered, but he has only just, mentally, felt able to go back out on his bike.

“My concern is the amount of people I see cycling without helmets. Wearing the right protective gear for the level of cycling you are doing is paramount – a helmet is the minimum for everyone. My husband has now invested in a helmet with a full face and jaw protector because he has experienced just how easy injuries can happen and it’s scary. It’s not worth the risk.”

Paul Watson urged all road-users to give each other space and respect on the roads, particularly at junctions and when vehicles are overtaking bikes, but said cyclists should always wear a helmet.

He said: “I can’t think of any logical reason why cyclists, including children riding on pavements and in parks, should not wear helmets.

“Nobody wants to think that they will be involved in a road collision, but the reality is that it could happen and therefore people should reduce their chances of head injury simply by wearing the right gear.”
Motorists are also urged to leave at least 1.5m of space between their vehicle and the cyclist when overtaking at speeds less than 30mph, and this should be greater in poor weather conditions or when the car is travelling at speed.