A teenager who miraculously survived after stepping off a bus and running into the path of a car has given her support to a new North East road safety campaign that is urging people to ‘Look Out for Each Other’.

Emily Armitage was 15 when she leapt off a bus and, distracted by her mobile phone, ran into the path of a car, causing her to bounce off the windscreen.

CCTV footage shows how she was thrown into the road like a rag doll – her head and elbow leaving impressions in the car windscreen and her shoes ending up in a nearby field and garden. 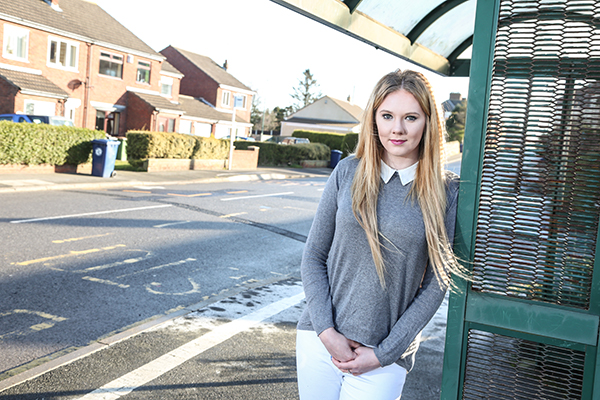 Amazingly, Emily, 19, suffered no major injuries, but she still endures pain in her legs and back and suffers anxiety over what happened.

She is backing the region-wide campaign by Road Safety GB North East, which is urging everyone, whether they are drivers, pedestrians or cyclists, to take care on the roads and to look out for each other, especially at times of higher risk.

“I should have waited until the bus had moved off before attempting to cross the road, but I didn’t – I thought it was safe to cross and I just ran straight in front of the bus and into the path of an oncoming car,” said Emily, of Lingdale, east Cleveland, a student at Prior Pursglove College in Guisborough.

“I want to support the campaign because I want people to know how easily it can happen.

“I wouldn’t wish it on my worst enemy. I was extremely lucky, but others may not be so fortunate. I hope this campaign can save lives.”

They are taking a joined up approach, with targeted campaigns during the next two years highlighting some of the greatest risk factors and most vulnerable road-users, to ultimately lower casualty and accident figures.

The latest figures show that during the past five years there have been 26,996 road traffic collisions on the region’s roads – resulting in 37,790 injuries, 326 fatalities and 3,953 serious injuries.

The majority of people injured were car occupants, accounting for 62%, but the most seriously injured were motorists (35%), pedestrians (27%), motorcyclists (19%) and pedal cyclists (12%).

Failing to look was the most common contributory factor, leading Road Safety GB North East to launch the new Look Out for Each Other Campaign, with County Durham recording the highest accident figures, followed by Northumberland, Newcastle, Sunderland and Gateshead.

Road Safety GB North East Chairman Paul Watson said: “You may be the greatest driver in the world, with a terrific safety record, but you could still be involved in a serious collision due to a mistake by someone else.

“Accident figures never make good reading. We are urging everyone to take extra care when on the roads, and to make sure they act safely. Crucially, we want everyone to anticipate other people’s poor judgment.

“Take a second longer at junctions to look for bikes, slow down when approaching stationary buses, be cautious if you can see children playing by the side of the road. It’s common sense, but we don’t always do it.

“You may not be at fault in a collision, but the trauma, and maybe even the guilt, will live with you forever if serious injuries and fatalities result.”

Ron Hogg, Police and Crime Commissioner for Durham, said he would be lending his support to the campaign.

He said: “Road safety is something we can all relate to because we all use the roads and we are all vulnerable to injury and the heartache of losing loved ones.

“Nobody sets out with the intention of being involved in a collision, but it could be life-changing if we are and it can be avoided.

“It makes sense for all partners in the region to work together to bring down accident figures. We urge everyone to be safe and to recognise where the risks are higher. Slow down and drive in accordance with the roads and the weather. Let’s look after each other.”

Police and Crime Commissioner for Cleveland Barry Coppinger said: “I was shocked to hear about Emily and wish her well for the future. This campaign is so important as taking steps to look out for each other can save lives. We’re now in 2016 and it’s the age of distraction, whether this be from mobile phones, busier roads, or chaotic lives – we lose sight of the importance of safety on the roads. I am happy to continue to support this campaign and work with our partners to prevent injury on our roads.”

Total injuries in the North East by local authority and severity, Dec 2010 – Nov 2015